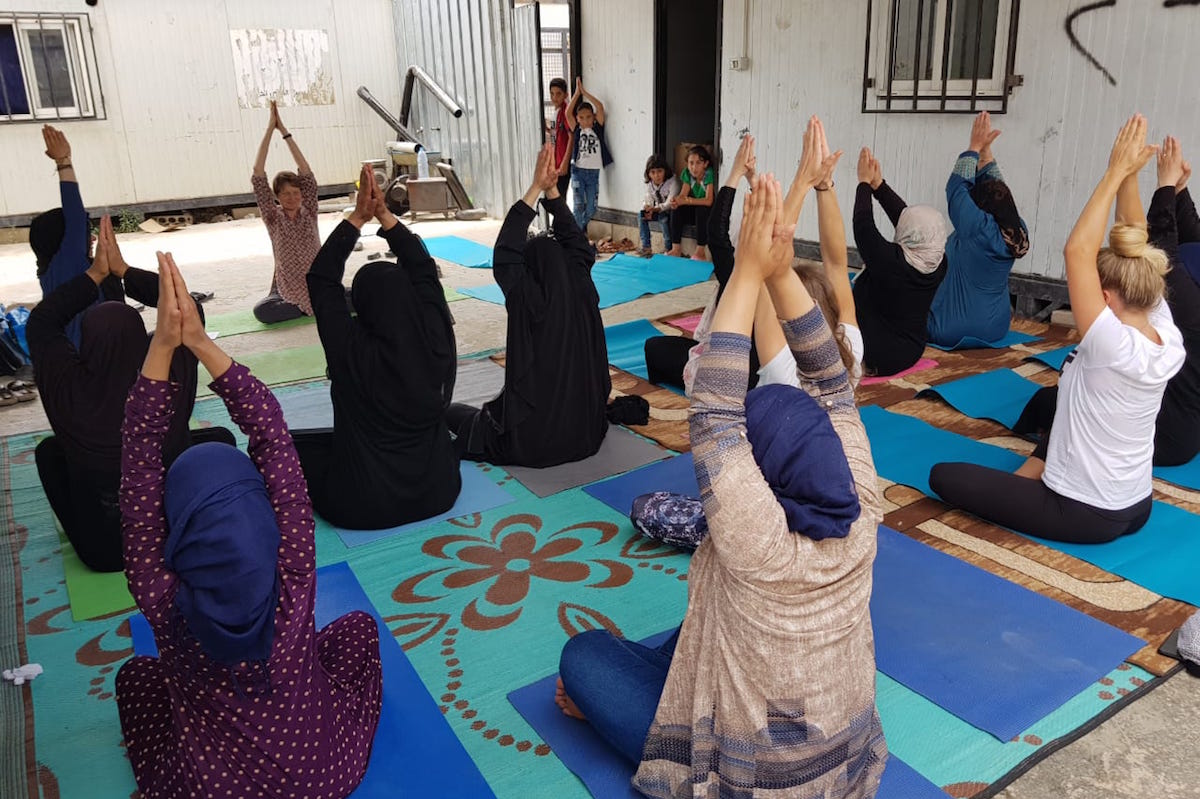 Lebanon is home to approximately 1.5 million refugees, numbering roughly a quarter of the entire population—the highest proportion in the world. Many Syrian refugees in Lebanon have witnessed or experienced physical, psychological or sexual violence, and continue to experience food insecurity, discrimination and social isolation. Reports of traumatic flashbacks, uncontrollable emotions, hopelessness, despair, and unusual physical and mental exhaustion are also common, as are high rates of depression, anxiety and post-traumatic stress disorder (1).

Women in particular are increasingly exposed to sexual assault, interpersonal violence and survival sex work in the settlements (2),  yet there are few mental health services available for Syrians in Lebanon (3), and even fewer that cater to women’s needs. To address these challenges, the organisation Tools for Inner Peace has been implementing a yoga program for mental health and psychosocial support (MHPSS) in informal tented settlements and community centres in the Beqaa Valley region since 2017. This program supports women to learn techniques to calm themselves and feel safe during traumatic flashbacks, build peace within themselves and the community, and develop resilience and improved self-esteem. So far, reports collected from the participants indicate that the yoga program offers a low-cost, low-risk and potentially sustainable approach to providing MHPSS in an emergency context where mental health services are limited.

The benefits of yoga for MHPSS

Yoga is increasingly used as a form of MHPSS for groups that have experienced trauma, including veterans, survivors of interpersonal violence and resettled refugees. However, there is little existing research on yoga for MHPSS in emergency contexts.

Yoga has several key benefits as a form of MHPSS. Yoga practices can help participants to reduce stress and feel more in control of their lives. As a mind-body therapy, it promotes mental and emotional wellbeing by providing participants with an increased awareness of their body and breath, which has been shown to improve emotional control (4). Although the yoga practices are not strenuous, the spinal articulation and gentle stretching also reduces pain and discomfort, which promotes wellbeing. Importantly, the yoga program is not obviously associated with mental health, which makes it ideal for cultural contexts where mental health disorders are considered shameful, as is the case for many Syrians.

The Tools for Inner Peace yoga program is strongly informed by trauma-sensitive yoga or yoga for trauma practices. This means that all the teachers have incorporated basic precautions for working with trauma survivors into their classes, such as:

Many of the guidelines for trauma-sensitive yoga also align with guidelines for MHPSS, such  as creating a welcoming and safe space and putting students in control. Others are specific to yoga but are governed by similar concerns around avoidance of further harm, such as the avoidance of physical adjustments which might trigger students with experiences of physical or sexual violence.

The distinction between trauma-sensitive yoga practices and more mainstream yoga practices is crucially important for the emergency context. For example, the final resting pose, shavasana, is typically practised with eyes closed, yet in trauma-sensitive yoga practices this is considered potentially triggering. In the Tools for Inner Peace yoga program, the volunteer teachers instead provide students the option to have their eyes closed or to do relaxation exercises with eyes open. Such practices might also include humming and vibrations to soothe the body.

In line with trauma-sensitive yoga recommendations, the teachers invite rather than tell students to do each pose and offer numerous options to make postures easier or more comfortable. The teachers encourage students to focus on their own self-knowledge and understanding in order to determine how far they will push themselves in a class. The classes are also relatively similar week-to-week, so that there are few surprises and participants can anticipate what will happen in each class.

The feedback from participants in the program indicates that these trauma-sensitive yoga practices are central to the success of the program as a form of MHPSS. Participants focus on the relaxation and mental health benefits they get from the classes, and indicate that although the physical benefits of increased body awareness, strength and flexibility are appreciated, they are largely not what draws the women to attend classes or practise yoga at home. Only one participant attended yoga purely for the physical benefits.

One of the ways that yoga can support mental health in emergency contexts is by providing a structured system for learning to manage traumatic flashbacks, a common symptom of PTSD. This is because the breathing and relaxation techniques are taught systematically and in tandem with physical postures, often through imagery or guided meditation, therefore participants are supported through every stage of the relaxation process rather than being told to “just try to relax”. As participants increase their sense of control over creating positive bodily sensations such as relaxation and a sense of peace or wellbeing within the self, they report increased self-confidence and capacity in using these same techniques to manage traumatic flashbacks.

For example, one participant said that she has learnt to view her flashbacks as temporary—something that she was experiencing and could allow to pass. She explained that this came about because during a yoga class she could feel a flashback starting, but realised that because her body “felt good” from the relaxation of the yoga class, the flashback was not as distressing as normal and she was able to let it pass over her. She now continues to use this technique during flashbacks and reports a reduction in the number of flashbacks and a greater sense of control over them when they do come.

Another student used to experience uncontrollable body rocking when she heard loud noises. She has also seen a reduction in body rocking after starting the yoga program, which she says is because “They taught me how to make everything easily, they would say ‘try to let go and respect your body’s limits’. This rule helps me also in my life, to stop me thinking all the time about my problems.”

Increase in socialisation, self-esteem and confidence

The classes also provide valuable opportunities to socialise that would otherwise be out of reach. The classes are women-only, and are therefore largely considered acceptable by community members, so women who otherwise experience considerable restrictions on their movements and activities are able to attend the yoga classes and make new friends—something that is of particular value to the teenage girls in the program who experienced greater restrictions on their movement than female heads of households. Participants have also reported that they are more social now because they have more energy and patience to spend time with other people; this has also had a positive impact on relationships and self-esteem.

The classes are also beneficial for students’ confidence, and several have reported that they now feel more capable and self-assured about their own abilities. For example, one of the participants said that she would prefer to do yoga rather than go to a counsellor, because when you do yoga “it’s like helping yourself (you don’t need anyone else) and in a better way than someone else can help you”. Similar improvements in self-esteem and understanding of one’s own capacity were reported by other participants.

Promotes sense of peace and wellbeing in the self and community

Yoga not only provides benefits to the participants, but also supports community wellbeing. Several students described positive impacts on their mood and emotions and reported that they felt more patient and able to manage interpersonal conflict as a result of yoga. For example, one student said that the yoga classes have helped her communicate more effectively, and that she now feels: “better able to understand the people around me and to communicate with them in a calm way”.

Students also describe feeling more social and patient, and even more interested in helping others. One participant describes helping others now that she has more energy from yoga: “I try to help someone daily. Help can be encouragement, listening to them, or just getting simple things for people.” Another participant says that “after practicing yoga I feel that I must help others. Like sitting with others and listening to them, trying to help them as much as possible.” These statements align with emerging research about how yoga can improve interpersonal relationships and may even contribute to peacebuilding efforts. (6)

Reduction in physical discipline of children

Several of the participants have self-reported that they have decreased, or even entirely stopped, using physical discipline on their children as a direct result of the yoga program. Some participants say that this is because yoga helps them to feel so relaxed that they now feel more in control of their emotions and responses, so they no longer feel the need to use physical discipline. One participant described how she now feels able to negotiate with her children because she has more energy and patience than before, and that for her, this is one of the key benefits of the yoga program, as her changes in discipline have also improved her relationships with her children. It is possible that these reports in reduced physical discipline are because yoga functions as a release valve for stressed parents, as well as a safe space where participants can escape their day-to-day worries and gain perspective.

A significant challenge has been the lack of suitable volunteer teachers in the region who are familiar with yoga for trauma techniques. This means that the program is run in six- or twelve-week cycles when a volunteer teacher is available, rather than year-round.

Plans to train some of the local Lebanese volunteers in yoga instruction have been delayed due to the COVID-19 pandemic. However, the Tools for Inner Peace program is currently training a small group of Syrian women using online instruction from one of the yoga teachers facilitated by in-person support from a Lebanese volunteer.

There are also issues with regular attendance, as participants struggle to make time for the yoga program because of demanding domestic or caregiving responsibilities.  As the program cycles are relatively short, this means that some participants do not receive the same benefits or may not learn enough to be able to practice at home and maintain the benefits. It is probable that this challenge will be reduced as more Syrian women living in the settlements receive training in yoga instruction and classes can be run more consistently.

Although most participants did not report any significant pushback from their communities about the appropriateness of yoga for Syrian women, a couple of participants did report varying degrees of resistance from their families or communities. One woman interviewed was not allowed to attend the yoga classes at all because her family did not allow her to leave the tent unaccompanied. This pushback may decrease with more exposure to yoga in the settlements, as other participants reported considerable support from family members after they were able to see the benefits and assess that the program is culturally appropriate and non-threatening.

Recommendations for implementing yoga as MHPSS

In order for yoga to be effective for MHPSS in emergency contexts, it is recommended that the following minimum standards are met: