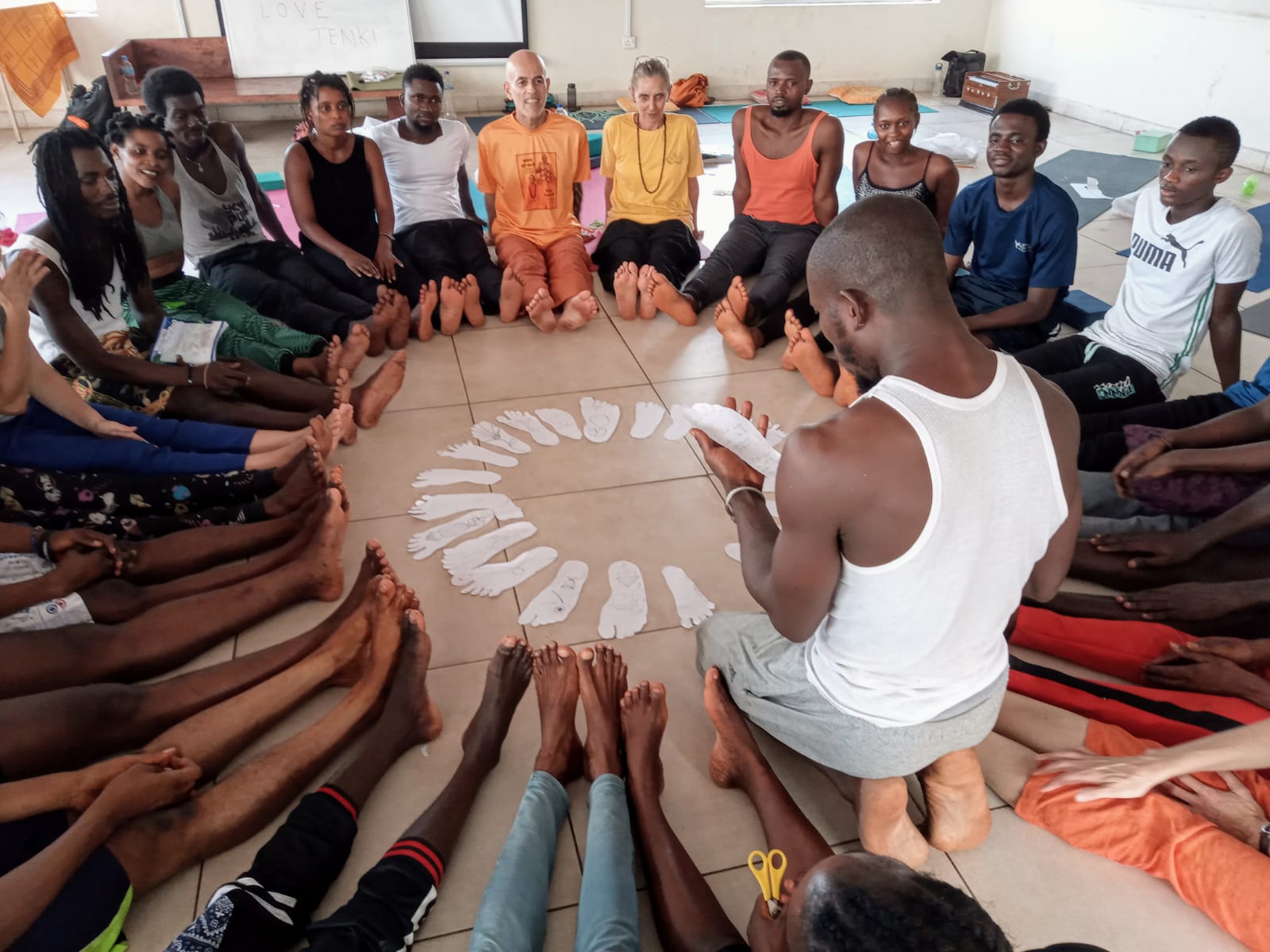 These are some personal reflections by Mantramala (Minna Jarvenpaa) on the Yoga Pura Vida teacher training that Tools for Inner Peace supported in Sierra Leone:

The week before our departure from Sierra Leone was full of emotion: grief, joy, memory of old hurts, love. Over the course of the first eleven days of the training, participants had been finding their way into all the aspects of yoga, opening up, releasing tension, going deeper. Old memories were starting to come up, both tender and sad.

On Day 12, we started teaching Yoga for Children and discovered that many of the participants had been orphans, street children or refugees from the civil war; some had survived sexual abuse or abandonment. Others had been pulled out of school and made to work in the streets by relatives. Several had never had the safety or care to really be children. All carried within them the inter-generational trauma of slavery on which Sierra Leone was built. Now we were asking these same people – as young adults – to play games, sing children’s songs and be silly, and it released waves of emotion.

At the start of the training, stress and tension were visibly held in the participants’ bodies: chests caved in, bellies so tight that at first there was no sign of the breath moving in the abdomen, knees coming up to the ears when sitting cross-legged. On the level of the mind, there was also blockage, as if the unconscious wanted to keep out the light. The minute we asked participants to lie down in shavasana, their minds would shut down and go to sleep. Seven days into the training, we started to see first signs of a shift. Our team of trainers suddenly realised that we could see some bellies moving with the in-breath and the out-breath. A few days later we noticed knees coming closer to the floor in the cross-legged position and backs held upright. On Day 10, the first participant could recall elements of the yoga nidra.

The training was not only for the participants; it also continuously stretched the four of us who served as the teachers, Dharmajyoti (Marcelo Vega, Spain), Chittaroopa (Cecilia Gonzalez, Uruguay), Emilia Picca (Argentina) and myself. In an intense 19-day spurt, we had to improvise every day and every hour to bring the teachings of classical yoga in the right form to these beautiful souls born into hardship. Some of what we thought we would be able to teach in the first week, or at least by the end of the 19 days, we have had to postpone to the months and year ahead, as we continue to tutor and guide participants from a distance.

At the same time, the essence of yoga, that which cannot be taught but can only be absorbed, has landed on fertile ground in the hearts and minds of each and every one of the trainees. With the teaching of the Yoga for Children techniques, there was an acceleration in the release of trauma and tension, an opening of hearts and bubbling up of joy. If ever I doubted the power of yoga, now I have personally witnessed its ability to transform even the greatest suffering into strength and optimism. This is yoga to build a better world.

If you would like to support one of our participants with a scholarship over the coming 18 months of their training, click here.

With my heart full,